We seem to get a lot of questions from local businesses about Guerrilla Marketing: how it works, how much it costs, whether it’s “beneath” a reputable business, and so on. So we thought we’d take a moment to answer some of those questions and maybe expose a few myths.

Guerrilla marketing is nothing new. In fact, some of its simplest forms predate conventional advertising and even the mass media themselves.

From our perspective, guerrilla tactics fit perfectly in the marketing arsenal of local businesses, from independent banks (if you can find one) to theatre troupes; from chic restaurants to dress shops; from dentists to CPAs. Still have questions? Call us. Brand by the Numbers 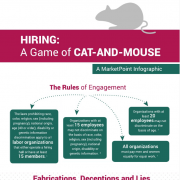 Frustrated by Crowdsourcing? Get Used to It.